Some of the city’s biggest developers—from Vornado Realty Trust to SL Green Realty Corp. —were salivating over a site in the heart of Times Square with potential for a new retail and hotel development. But instead, an unlikely partnership led by an Indiana-based developer little known in New York managed to grab the property at 47th Street and Seventh Avenue, finalized in a tense three-and-a-half week negotiation.

Mark Siffin, of Maefield Development, who has developed major properties in Miami and Los Angeles, but has never worked in New York before, spent four years assembling components of the site, including the building itself and signage rights, without knowing if he could buy out the tenants in the building—the last critical piece of the deal, which would allow him to raze the building and create a new development.

But with a deadline looming, Mr. Siffin didn’t have the approximately $400 million he needed to close the deal. About $800 million. Cost of buying and developing hotel and retail at 701 Seventh Ave. 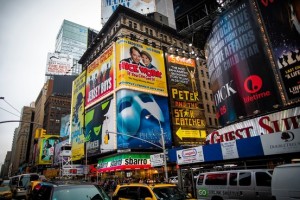 The building at 47th Street and Seventh Avenue will be redeveloped

Running out of extensions to the closing deadline, Mr. Siffin was introduced to Howard Michaels, chairman of the Carlton Group, through his lender, Jay Sugarman, chairman and chief executive of iStar Financial Inc. “It was now the bottom of the ninth and Sugarman wanted to see this thing have a happy ending,” Mr. Michaels recalls.

Mr. Michaels, who began his career selling photocopying machines and spent years as a loan syndicator, specializes in raising equity for complicated transactions. That’s proven particularly important in recent years due to the difficulty of obtaining financing. Mr. Michaels initially balked at the challenge of bringing together the Times Square deal, one of the most complex he says he’s ever worked on. “Raising $600 million for something with no cash flow is near impossible,” Mr. Michaels says. “I was taken in with Siffin and his charisma and the brilliance of the plan.”